Commissioned by award--winning composer Christian Henson, who along with the Spitfire team has deeply sampled these otherworldly tones to work in perfect harmony with contemporary music. The world's first sampled Titanium Euphone is made up of finely crafted glass rods, which when stroked trigger tuning rods and metal & fibreglass amplifying resonators, creating haunting, bell-like resonances with a sound like no other. The instrument is a newer and more musical incarnation of the famous Cristal Baschet.

In early January 2014, Christian Henson and Spitfire’s Production Director Stanley Gabriel drove down to deep rural France and up a steep, winding mountain to a small and unassuming crofter’s cottage. Tines, screws and sheets of fibre glass lay sprawled around the premises, revealing the inner sanctum of a creative genius. This much anticipated day was preceded by two years of emails, a degree of coercion and a splash of circumstance and it was all about to pay off.

As they stepped through into what they’d later refer to as “the Aladdin’s Cave for any music maker”, they saw shaped pieces of stainless steel hanging from the walls. Plastics of every shape and colour filled the room. Every utterance, every word, footstep or noise sent all of the wonderful resonating surfaces into a sympathetic chorus. Some reflected wistful and tine-like sounds, some like a feeding back sine wave, and others like a distinct and arcing thunderstorm.

Inspired by their surroundings, Christian decided to commission the world’s first Titanium Euphone. It was finely crafted, and delivered by hand to their studios in London.

Alongside its obvious sonic similarities to the Cristel Baschet, the Titanium Euphone has a more wholesome, consistent and musical nature across its broad dynamic range. Having used the instrument extensively on his scores for Alien Isolation and Robot Overlords, Christian gained an intimate understanding of the instrument throughout the spring and early summer of 2014. Once wrapped on those projects, Christian and the Spitfire Crew decamped to Air-Edel studios for a week of sampling.

Each configuration has ben deeply sampled with over 7 continuous hours of samples being delivered in our raw sessions. This library contains 3 dynamic layers (which you access via your modulation wheel) for each configuration alongside some extraordinary percussive work with the instrument being played with soft vibraphone beaters over 3 dynamic layers. Plus an extensive library of live effects and additional techniques, including some remarkable harmonic glisses, some abuse of the instrument with a towel and some beautifully curated cluster chords.

The sonic nature of the Euphone is as complex as its build and look. Wherever you stand you will hear a different perspective and quality to the sound produced. Because of this, we also recorded it with a wide array of modern and vintage microphones from different perspectives and distances. These are, as always, presented in a simple and easy to use script with mixing options and signal assignment for 5.1 surround use.

The Euphone is a one of a kind, totally unique instrument that will bring an ‘other worldly’ expanse of inspiring lyrical sounds to your sonic arsenal.

Part of the Producer Portfolio which answers requests for drier sounding more manipulable samples, for more non-orchestral material, and for libraries that are affordable to all. Recorded by the Spitfire team in a number of smaller but excellent London studios, including the new Spitfire HQ in King’s Cross and their old favourite, the classic vintage studio Air-Edel in Marylebone. With a useful selection of classic/ vintage, modern, broad and room microphones, the Producer Portfolio features the talents of legendary musicians, producers, composers and programmers. With Spitfire’s existing orchestral and definitive ranges, we’re very proud of the “impression” that the hall at Air studios gives, but it’s not right for every application. With this new range, we have recorded in smaller spaces, close, mid range and room perspectives with carefully positioned ‘A class’ mics and pre-amps to give you the raw materials you need to make these sounds your own. 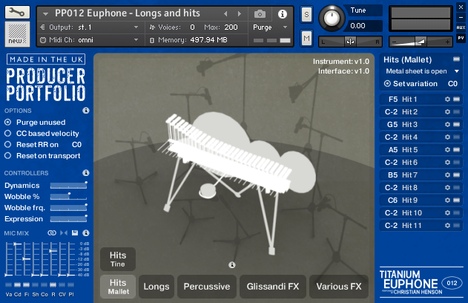