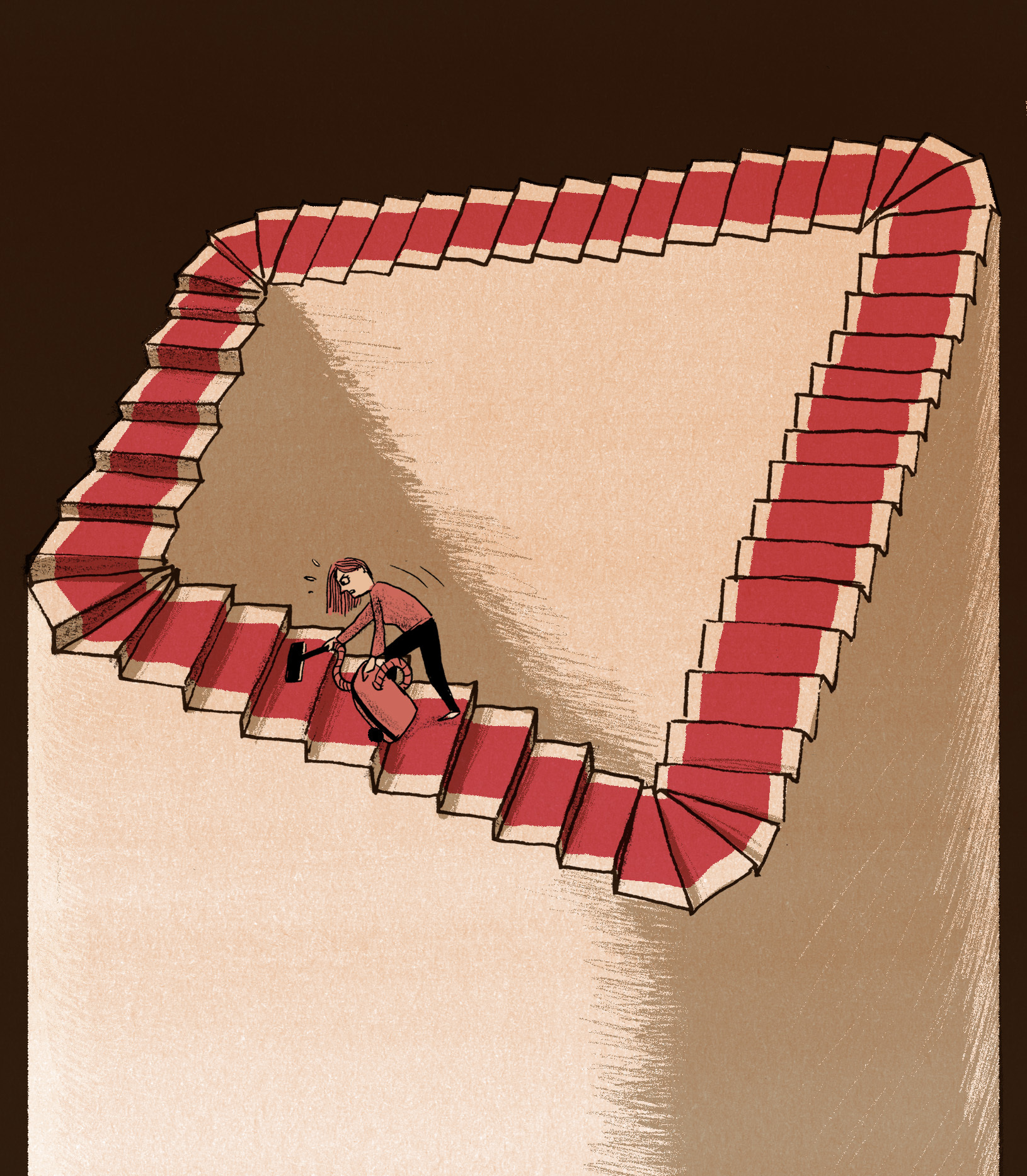 It is bloody hard to run away from yourself – however expensive your sportswear is. That’s the lesson my New Year’s resolutions always teach me. This whole business of change — unboxing the “new you” — feels like vacuuming an Escher staircase. Somehow you end up back on the same step, back to your old habits. Given how the self-help shelves of bookshops are so busy, there’s clearly no magic bullet – but it is very soothing to go there and browse through publications with titles such as “The Power of Now”, and learn how “now” has a power that, should you need it, you could utilise. But not now.

If you are writing music, you are your own best frenemy. On the one hand, you are the indispensable asset that gives your music a fingerprint – on the other, you can get trapped by your ideas, bored of your own music. But there you are, every morning, always hanging around yourself … What to do?

Well, not totally – it’s not that bad – but there is a grand tradition of handing over some of the musical process to the random gods. In Marcel Duchamp’s Erratum Musical, he wrote notes on cards and drew them out of a hat to create a piece. John Cage’s Music of Changes got its notes from the I Ching. György Ligetti’s Poème Symphonique is basically the sound of 100 fully wound up metronomes starting at the same time and gradually running down – yet it never fails to create a kind of musical drama, all the way down to that final tick. Similarly swinging, and another example of “process music”, is Steve Reich’s Pendulum Music, which is written for microphones suspended and swaying in front of amplifiers, creating a pattern of phased, whistling feedback. These random interventions can give your musical brain something else to feed on. When Reich created tracks out of tapes that were running at slightly different speeds, phasing against each other, he wasn’t strictly in control of that process – but he could decide what went on the tapes.

jump out of a plane

Try a musical version of “Morning pages” or “Automatic writing”. Christian Henson refers to this as “Charcoal sketching” (or “Finger farts”). You know that feeling when you are trying to write something and every time you start to get somewhere a certain critical part of your brain … oh, forget it. German poet Friedrich Schiller will explain this better:

“In the case of the creative mind, it seems to me, the intellect has withdrawn its watchers from the gates, and the ideas rush in pell-mell, and only then does it review and inspect the multitude. You worthy critics, or whatever you may call yourselves, are ashamed or afraid of the momentary and passing madness which is found in all real creators, the longer or shorter duration of which distinguishes the thinking artist from the dreamer. Hence your complaints of unfruitfulness, for you reject too soon and discriminate too severely.”

We all have our inner critic. The problem with that “watcher on the gate” is that it can get involved too quickly, like an editor standing over you saying “This is crap!” before you’ve even sharpened a pencil. One way to run away from it is to force yourself to just write – or play, bang, blow, sing, however you get your music down – without stopping for a good few minutes. (With “morning pages”, the suggestion is that you have to fill three sides of A4 lined paper, handwritten). It doesn’t matter what comes out — the point is, you must not stop and look back or consider what you’ve just done. Keep moving forward, running ahead of that “watcher”. Their time will come.

let the performer sort it out

If you are lucky enough to have real humans playing your music, pass the buck. Write a few notes down and then add: “Player one to improvise something amazing with these notes for 10 minutes. I will be at lunch”. OK, that’s passing the buck quite far, but there are ways to farm out the creation of your own music, even outside the worlds of jazz, rock and pop, where it is more common. Karlheinz Stockhausen would sometimes let the performer arrange the events he composed any way they liked (i.e. Klavierstück XI). Or you could try drawing the music in graphic form and asking the player to interpret it (see Earle Brown and Morton Feldman).

Clearly, these are high-risk strategies if you are in a film recording session and the money is flowing down the drain and the lawyers are trying to work out who will get the composing credit … But John Williams managed some “aleatoric” writing on his score for the film Images. In collaboration with Stomu Yamashta, who plays the baschet and other percussion instruments, they found a way, partly through graphic notation, to include improvisation within the strict, time-coded world of film scoring. In an interview with Irwin Bazelon, Williams explained: “I might hit a chord with the orchestra and the score might indicate dashes for ten seconds on such and such an instrument – crescendo into double forte – that sort of thing.”

One of my favourite examples of players being given control is John White’s Hooting and Drinking Machine, which I last performed at a stag do in a pub in 2018. Each player has a full bottle of beer, and a set of instructions that include blowing over the top of the bottle a certain number of times, then taking a swig. The wonky rhythms gradually drop in pitch as the beer is finished. And the locals look on with bemusement and horror.

So, a pianist comes on stage to perform the final piece of a lunchtime concert. It has all been quite challenging, discordant music so far, so this short ditty – which sounds like a badly transcribed nursery rhyme – is a bit of light relief. The piece finishes, the audience claps, the pianist goes off. He then immediately comes back on, sits down and plays the same short piece again. A few chuckles, more applause, he goes off, comes back on again, plays the same piece. And again. Applause. Off. And again. Snigger. Applause. Off. And again.

I’ve forgotten who the composer was, though I’ll never forget that concert, even though it was over 20 years ago. We – the audience – eventually escaped by figuring out the rule: if there was any applause after a performance of the piece, the pianist would play it again. Only when there wasn’t a single clap did he leave the stage for good.

On a more practical musical level, sometimes a totally open brief to do whatever you want – go wild! – can have the opposite effect. It’s as if being suddenly dropped in to open water is too scary and there is a panic to find a familiar port. Go the other way and you will produce different music, if you force your creativity to cope with some restrictions and rules. Arnold Schoenberg was so convinced music had to change – and not just his own – that in the 1920s he came up with the “twelve-tone technique”. If you apply it strictly, then each and every one of the 12 semitones in the octave must each be heard once, and only once, in what is called a tone row, before that row can be repeated. You can invert the row, play it backwards, transpose it etc, but the equal status of each note must be maintained. Intense. And atonal. But composers who were disciples of Schoenberg (Berg, Webern etc) found varying levels of applying the technique. One unlikely sounding twelve-tone user was Tom and Jerry composer Scott Bradley, who had been a student of Schoenberg. “The twelve-tone system provides ‘out of this world’ progressions so necessary to underwrite the fantastic and incredible situations which present-day cartoons contain.”

Rules can be as simple as restricting yourself to the last instrument you bought – as Cliff Martinez reputedly did with steel drums to create the soundtrack to Solaris. It could be creating a virtual band of four instruments you have never used and sticking to them no matter what, or restricting the notes and intervals you can use. In Eyes Wide Shut there is a Ligeti piano piece, one of his Musica Ricercata, that only uses semitones. Change how you get your music into the system: use a drum pad instead of a keyboard, or your right hand if you are left handed, or if you are used to letting your fingers find the music, compose in your head and sing it into a recorder and work that up. Get a pitch-to-midi converter and sing in to your synths. Write a tune in 10/4 time if you haven’t ever. Ban 120 BPM. Whatever you don’t normally do.

Steal something! Brazilian jazz musician Hermeto Pascoal – who used to make flutes to play to the birds, rarely with his shirt on – has at times got his whole band to play along to recordings of birdsong, as well as somehow finding a tune in a recording of a football commentator. Olivier Messiaen transcribed bird song and often used it in his music. John Cage’s misunderstood “silent” piece 4’33” was all about how music is happening all around us if you listen to it that way. He just framed a period of time to focus our ears on it. “Everything we do is music,” he said – even if that is the sound of baffled punters coughing and shuffling in their seats. Go for a wander, take your phone, listen and record something. It could be the beat of an escalator, a dripping tap, a car alarm, a basketball bouncing or the rhythm of a subway train and the wind whistling down a tunnel. Or look at a photo or painting and turn that into music, in whatever way you can cook up.

This is a set of over 100 cards, subtitled “Over One Hundred Worthwhile Dilemmas”, created by Brian Eno and Peter Schmidt and first published in 1975. Each one contains an idea – a statement, a command, a provocation – that you could choose to follow as a way of leading you towards somewhere different. Things like: “Change nothing and continue with immaculate consistency”, “What to increase? What to reduce?”, “Tidy up” and “Give way to your worst impulse.” You can still buy the cards, but there are also online versions, and the pack was used by Eno himself while recording David Bowie’s Low, Heroes and Lodger albums, as well as by bands such as Coldplay, Phoenix and MGMT. They are not written to be specific to music – which is a good thing since they make you find answers from beyond the echo chamber. They are a little shunt in another direction, and can be especially helpful if you were last seen disappearing up your own backside.