Orbis gives you much more than organic field recordings —
90% of the library is made up of treated content, created from the clean recordings by our expert team of engineers in our own journey of sonic discovery. Our eDNA engine provides you with endless parameters and possibilities to enhance every sound even further. Discover hundreds of sounds, treated in various different ways using our expertise and technology, with every sound run through 3000 lines of code. Some have been subtly manipulated, while others heavily processed, unrecognisable from their original source material. From playable one shots and short phrases to tuned and untuned rhythmic loops and recordings up to a minute long, discover sounds with subtle movement, complexity and evolution. Throbbing basses and pulsing loops, ideal for dance music; thunderous drones, subsonic low-end and visceral, tortured drum hits, for adding movement and depth; Blade Runner-style synths, made from antelope horns, and ethereal pads and breathtakingly beautiful evolving textures, for three dimensional cinematic soundscapes. Designed to take you to new levels of sonic exploration and adventure, this library offers you a lifetime of inspiration, and is an essential resource for any producer, composer or sound designer looking for that new sound or texture.

Imagine the eDNA engine as a set of two turntables and a highly sophisticated DJ mixer. It contains two sound bays, each designed to create differing sonic treatments, with individual and independent modulators, control of trim, bend, glide, cloning, tuning, ADSR, LPFs, HPFs and wobbles that modulate pitch, volume and filters. The gate sequencer allows independent gating between these two bays and unified control of amount, shape, speed and length of sequence. These two signals are then unified with a x-fader.

Move between the sounds with the mouse or the factory-default assigned modulation wheel. We've also designed a custom script that oscillates the x-fader automatically with control over speed and phase, and eDNA's five-stage FX path contains 41 custom plugins, including bespoke IRs pre-loaded. There are two "layer FX" stages that affect sound A or B, plus an auxiliary FX stage that can be sent via the layers or master FX stage. Any parameter of these can be assigned for automation or assignment to your controller. 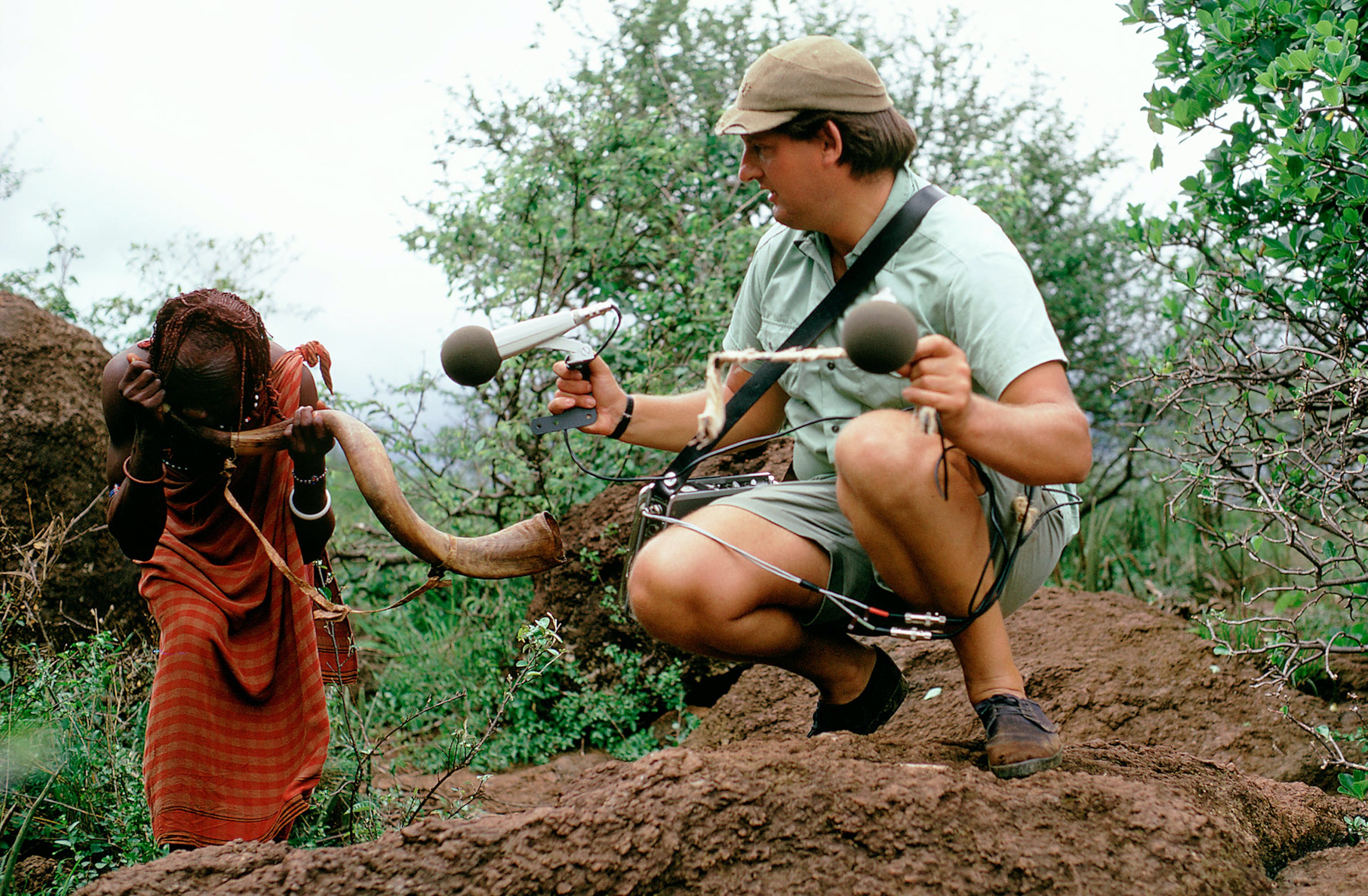 Through the adventures of music and travel, I have been privileged to experience our world as a composer and musical explorer. It is my humble dream to go on sharing my aspirations with future generations through the legacy of my sound archives.

His passion for travel, adventure and music started at an early age, and he first worked as a sound editor for the film industry. Although his dyslexia slowed his reading of musical scores, in 1965 he won a Foundation scholarship in composition to the Royal College of Music. He travelled widely in Europe and the Middle East, and while hitchhiking in Jerusalem he heard Islamic music for the first time and was immediately attracted to its beauty.

On his next journey to Bahrain, he took a professional stereo tape recorder and recorded the renowned pearl divers. From 1969-74, he travelled up the Nile from the Mediterranean Sea to Lake Victoria, visiting Egypt, Sudan, Uganda Kenya and Tanzania, inviting many local musicians to be recorded, honouring their music in perpetuity. During a ten-year odyssey across the islands of the Pacific Ocean from 1978, Fanshawe collected hours of indigenous music, documenting the music and oral traditions of remote parts of Polynesia, Micronesia and Melanesia. A very classy venture, which is slightly left-field, making it all the better in terms of unique and inspiring sounds.

Great film music often blends sounds from different cultures to create a rich tapestry. Orbis lets you infuse your music with DNA from around the world, from incredibly useful original recordings through to beautifully evolving textures.

The present is almost history. Every day is worth recording.

Yes, but we have updated that content, added around 50% extra content and presets on top of that, and it’s in its own dedicated plugin.

I am an owner of Earth Encounters. Are there crossgrade paths?

If you already own Earth Encounters, you will be eligible for a crossgrade, saving 50%. You will see your discount automatically when on the Orbis product page.

What is the eDNA engine?

The eDNA engine is the Spitfire Synth Engine which allows the user to fuse two sets of sounds, modulate these sounds separate from one another and apply a wide variety of FX.

Intel-based Apple computers only - M1 beta can be downloaded here

Intel Core i7 6th gen and later or AMD Ryzen 7