Spitfire takes its Evo range of products into a new realm with a series of evolving "motions" that will revolutionise the way in which you write and realise your string compositions.

The genesis of Evo Grid 3 is an evolutionary story in its own right. From our original 'Scary Strings' experiment, sampling players performing 'evolutions' that change over time and over a fixed number of registers, we came to create Angular String Evolutions and Fragile String Evolutions, with an ingenious design that arranges these evolutions across your ranges with a die randomisation function, delivering a near-infinite number of possible combinations. We also produced Woodwind Evolutions, giving you a truly original set of sonic possibilities. Since then, we have collaborated with Olafur Arnalds and Leo Abrahams, giving us their own takes on the Evo Grid.

This volume is the biggest development for the Evo Grid concept, orchestrated exceptionally by Ben Foskett. Initially the concept was to tackle one of the biggest sampling conundrums — the re-bow, i.e. repeated phrasing on the same note. So we thought, what better way to give us all options of time syncable re-bowing patterns than to put them on an Evo Grid? After two years of extended development and fiendish scripting, our alpha version arrived, and it was immediately clear that Evo Grid 3 was going to be so much more than we had originally hoped. 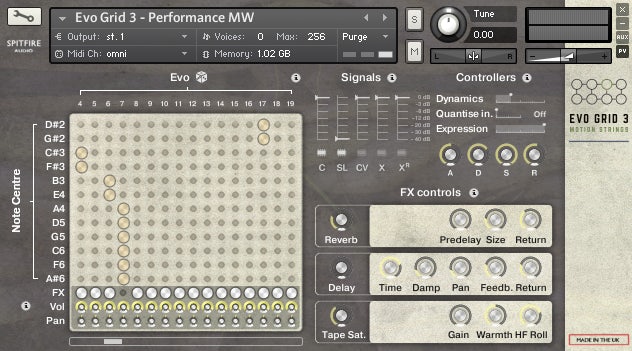 Based on the EMS VCS3 synth, this extraordinary and unique interface allows for instant gratification and customisation. With 1 or 2 clicks, you will be armed with something totally unique and inspiring. Scroll the Evo Grid to discover and activate Evos that are not visible. Pan and tweak each Evo for perfect blending. Punch in or out 3 useful modulators and effects. Mix your mic positions, all from the front panel.