Here’s my favourite summing up of the creative process, and more or less the condition under which this piece is being written: 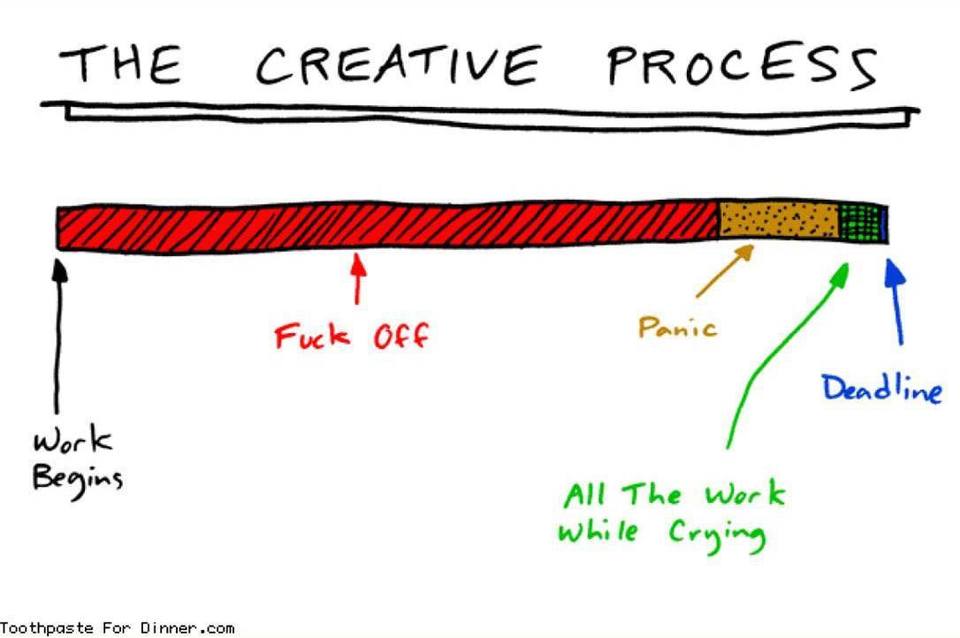 For about seven years, from 2003, my colleague Joe Berger and I did a comic strip for the Guardian newspaper. It was called The Pitchers. It lived in the Film and Music section and began life very simply, as two enthusiastic but quite rubbish scriptwriters (Chet and Foley) trying to sell films in a cartoon version of Hollywood that sometimes struggled to be as daft as the real thing. It was inspired – to make a high-octane overstatement – by Robert Altman’s film The Player, which had various moments of stories being pitched to movie execs in the classic formula of x meets y. I cringe to report that Chet and Foley’s first film pitch was a film called Tits’n’Asthma, and I daren’t think what x and y were in that case.

Things did get better; honestly. The universe The Pitchers lived in expanded, we reigned in the puns, and more characters – such as agents, actors and script doctors – arrived on the scene. Years into it, something became clear to us. While The Pitchers was, on paper, meant to be a kind of parody of the movie business, it was subconsciously always about the same thing: the strange and rewarding agony of trying to create stuff out of thin air.

This is all very personal. There are those for whom sitting down to create – whether words, music, painting or biodynamic mime – is just a glorious escape, a romp through their imagination in a constant state of ecstatic “flow” as the clock whizzes by and all the Apple products get grumpy at being ignored.

Still, the extensive creative self-help section of your local bookshop would suggest that a) there are lots of people who feel driven to create stuff but find it very difficult and b) no one has come up with the perfect solution to various versions of writer’s block. Joe and I consumed an awful lot of that self-help literature, under the guise of “research” for the strip. That research hid a guilty secret, though: If you’re a procrastinator by nature, there is nothing so soothing as procrastinating by reading books about possible routes out of procrastination.

If you go down that rabbit hole, your work area – which you have spent the last two weeks tidying and applying feng shui to, on the advice of your latest self-help manual – will soon become spattered with PostIt notes:

“Don’t get it right, get it written”

“Amateurs sit and wait for inspiration. The rest of us just get up and go to work”

“Writing is the art of applying the ass to the seat”

That last one would have given writer Douglas Adams a chuckle, and he would probably read it in the bath, since he allegedly spent more and more time bathing as his deadline approached. I think I have journalism to thank for … well, basically getting down to doing anything. It has made me a bit of a deadline junkie, but at least those deadlines squeezed something out of me – work that, without that pressure, I would have kept floating just out of reach on the horizon. Things that hover over there, in soft focus, will always be potentially good. Potentially life-changing. Potentially successful.

And there lies the dread. A potentially great piece of work you haven’t yet done is very seductive. It shields you from the crushing defeat of hammering away for a day and producing a heap of crap.

So another PostIt note goes up: “Ever tried. Ever failed. No matter. Try again. Fail again. Fail better.”

Armed with the knowledge that the journey is more important than the destination, and with your box of Brian Eno Oblique Strategy cards at the ready, you dive in. (Well, actually, probably just grab a coffee first.)

One of the most famous books on writing, Dorothea Brande’s Becoming a Writer (1934) is forthright about what’s going on here. Until you’ve made the leap in and put pen to paper, regularly, and with discipline, you aren’t a writer – and all the books on how to write novels and screenplays are useless to you. The big step is becoming a writer in the first place, hence the title of the book. For that, you have to write – and she begins by making you sit down and write without stopping. It doesn’t matter what it is, or if it makes sense. It is sometimes called “automatic writing”, and you could do it with music too. You make an appointment to do this writing, and you should stick to it. If you fail to do it more than twice, she says, give up. You are just not a writer. End of story. It’s pretty bracing. Her feeling is that if you can’t manage to keep that simple initial commitment to yourself, you’ll never get through a book.

You end up with a pile of material that, whether you like it or not, is yours. It is in your voice. It is about making sure that part of your mind that wants to take back, criticise and edit, is kept chained to a radiator while you at least get some material out there to work with.

Being asked to write something, when an editor has decided it is an interesting topic, has similarities to writing applied music. In both cases you can kind of sneak your way around that censor in your head, and park your ego to one side. You are serving something outside of yourself. Who cares if you wouldn’t normally write a tango? It is what the scene really needs.

That kind of work doesn’t always slay the dragon, though. I realised that the other day when a composer asked me a simple question: “What music do YOU want to write?”. It was weirdly paralysing. There was that little dread again, of finding out what is inside myself, the stuff I would be wholly responsible for. I can only ever answer that question by starting, and that’s still scary. Film critic Anthony Lane has said that he doesn’t know what he thinks of a film until he starts writing.

It was a back to school moment, and that’s good. If there’s one thing I’ve come to perversely enjoy, whether making crappy film puns or bad tangos, it is that it stubbornly stays hard – though the nature of the difficulty changes over time. As the original creator of my currently neglected iPhone once said: “Stay hungry. Stay foolish.”

Now, what was it that I was meant to be doing today?

See more of The Pitchers’ comic strips at www.bergerandwyse.com