In Depth: The Reverb World Cup

Christian and Jake Jackson put a selection of reverbs to the test in a World Cup themed tournament.

When Jake and I did our original reverb shootout, we concentrated on the tails. This time we wanted to try the usual suspects (and some new ones!) in context. Jake set up a way for us to actually hear what the reverbs were doing in isolation, with a track that is dense, detailed and brash. Where we had previously had to focus on the granularity of that all-important tail end, we in this instance would need to hear the nuts and bolts of how a reverb created its sense of space, and the results were staggering, as it became clear that no two reverbs sounded anywhere near the same, and were all performing all sorts of tricks and magic to create depth.

The candidates this time included favourites of ours and our peers, from the majestically expensive to the staggeringly reasonable: The stalwart orchestral standard TC6000 hardware surround reverb ($16,000 new!), the modern classic Bricasti hardware stereo reverb ($3,950), the algorithmic encyclopaedia that is Altiverb ($520), the die-hard Lexicon Native ($399), Exponential Audio’s R2 ($239) which seems to be becoming the favourite of Hollywood composers and engineers, the stunningly attractive Fab Filter ($999), Logic’s all new (and all ‘free’) ChromaVerb, and the budget (in price but not sound) Valhalla ($50), which never ceases to amaze us considering its price.

We then set about doing two blind tasting tests with a football world cup theme. We randomly picked reverb pairs in shootouts and gradually knocked out our less favourite into two grand finals.

This was my tournament: 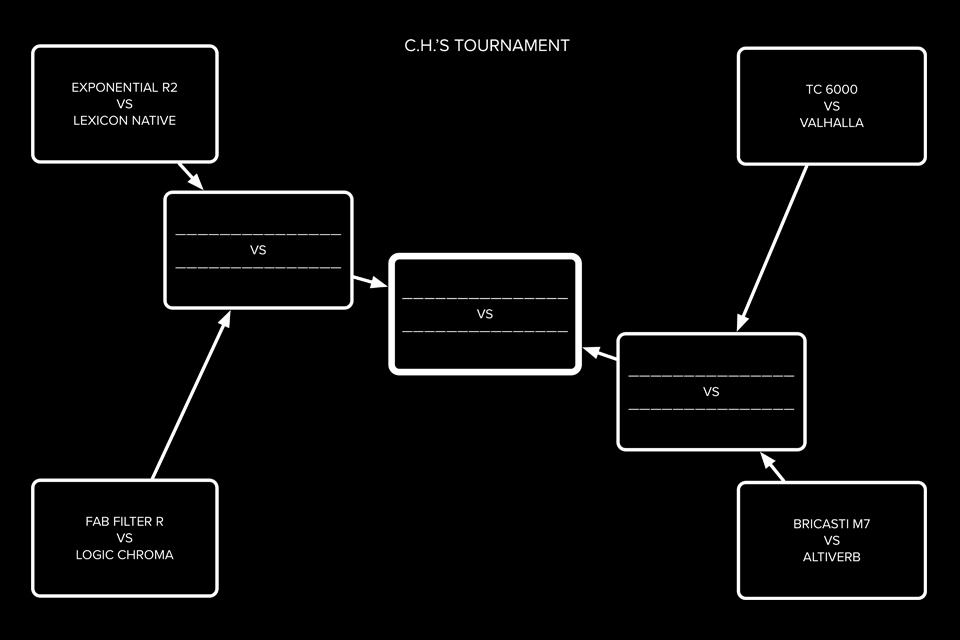 What became clear the minute the challenge started, was how much easier it was to actually hear what the verbs were doing without having anything visually distracting me. I was certain that the pricey verbs would naturally rise to the top. Having heard what the verbs had done in isolation, it was simple. I was going to pick the ones that least mucked about with my music. So, it was surprising when I saw the actual results: 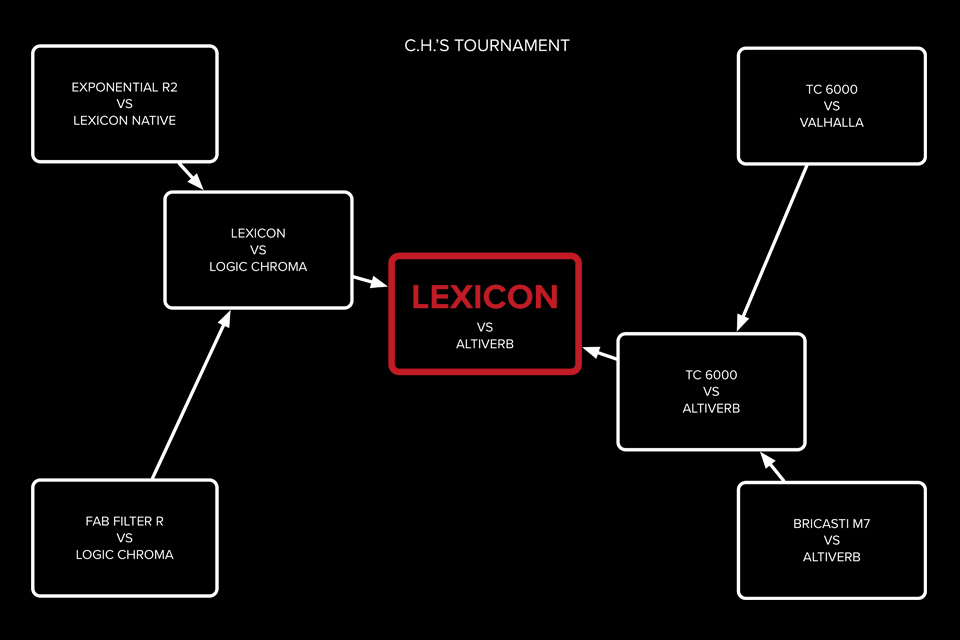 Which was somewhat depressing to see, considering what I have spent on hardware verbs over the years! Jake’s tournament was no less surprising: 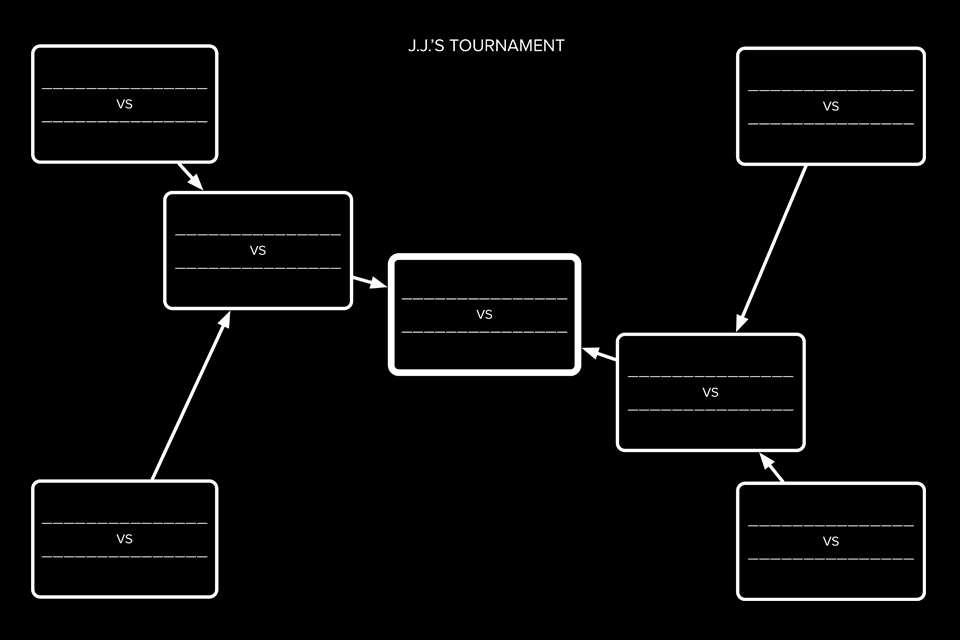 With Jake being sure he was always going to be able to detect his stalwart Altiverb, it was surely a shoo-in: 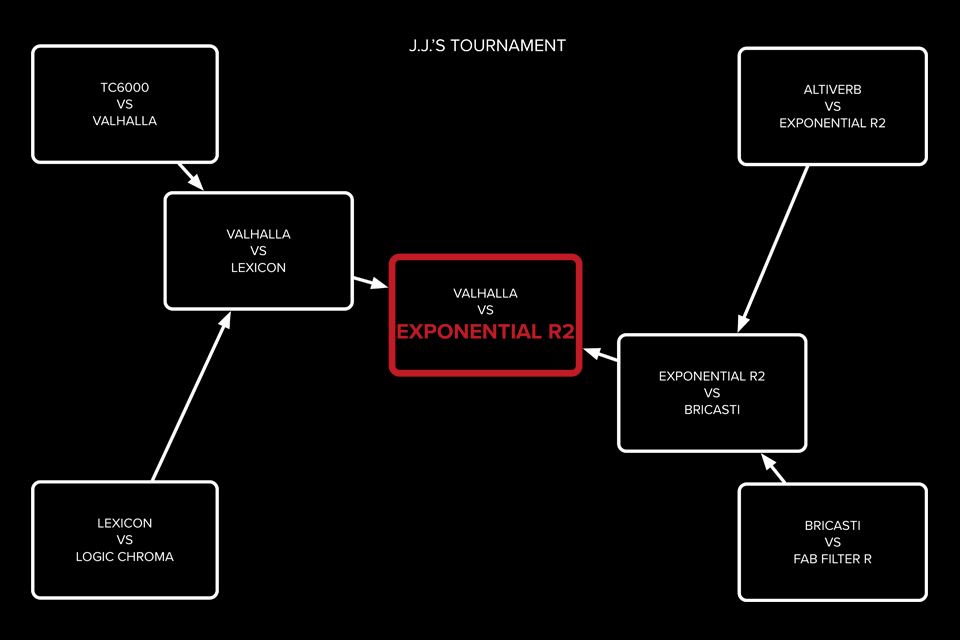 But he ousted it in the first round! With the new kid on the block, Exponential Audio’s R2, taking JJ’s cup.

If there was one clear winner from the two, it was Valhalla DSP’s offering. For a $50 plugin, it is clear that this gloriously simple interface and delicious algorithmic reverb tail is a hard hitter, faring well in both of our tournaments. Its price vs performance makes it the surprise display of the tournament, the winner of the golden boot, the player’s player.
But the most important thing to be taken from this experiment is that we shouldn’t be shackled and paralysed by the fear that what is standing between us and success in the music industry is tens of thousands of dollars of equipment and software. Brilliance doesn’t stem from being cashed up and rich. It comes from hard work, talent and making the best of the resources available to you. It’s not how much money you spend on tech, it’s what you can do with it.

Right, I’m off to eBay to flog my hardware!

What is the best reverb for orchestral samples?

Christian Henson is joined by Spitfire's Chief Engineer Jake Jackson to talk about their favourite reverbs.