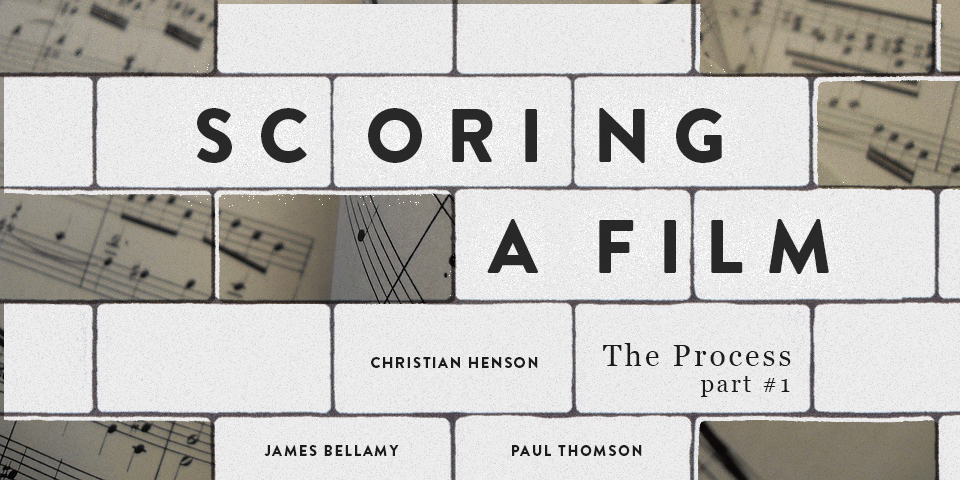 Part #1 of a must have 3 part guide to preparing, composing and delivering a modern film score written by Spitfire’s very own James Bellamy, Paul Thomson and Christian Henson.

Part One: Getting Started 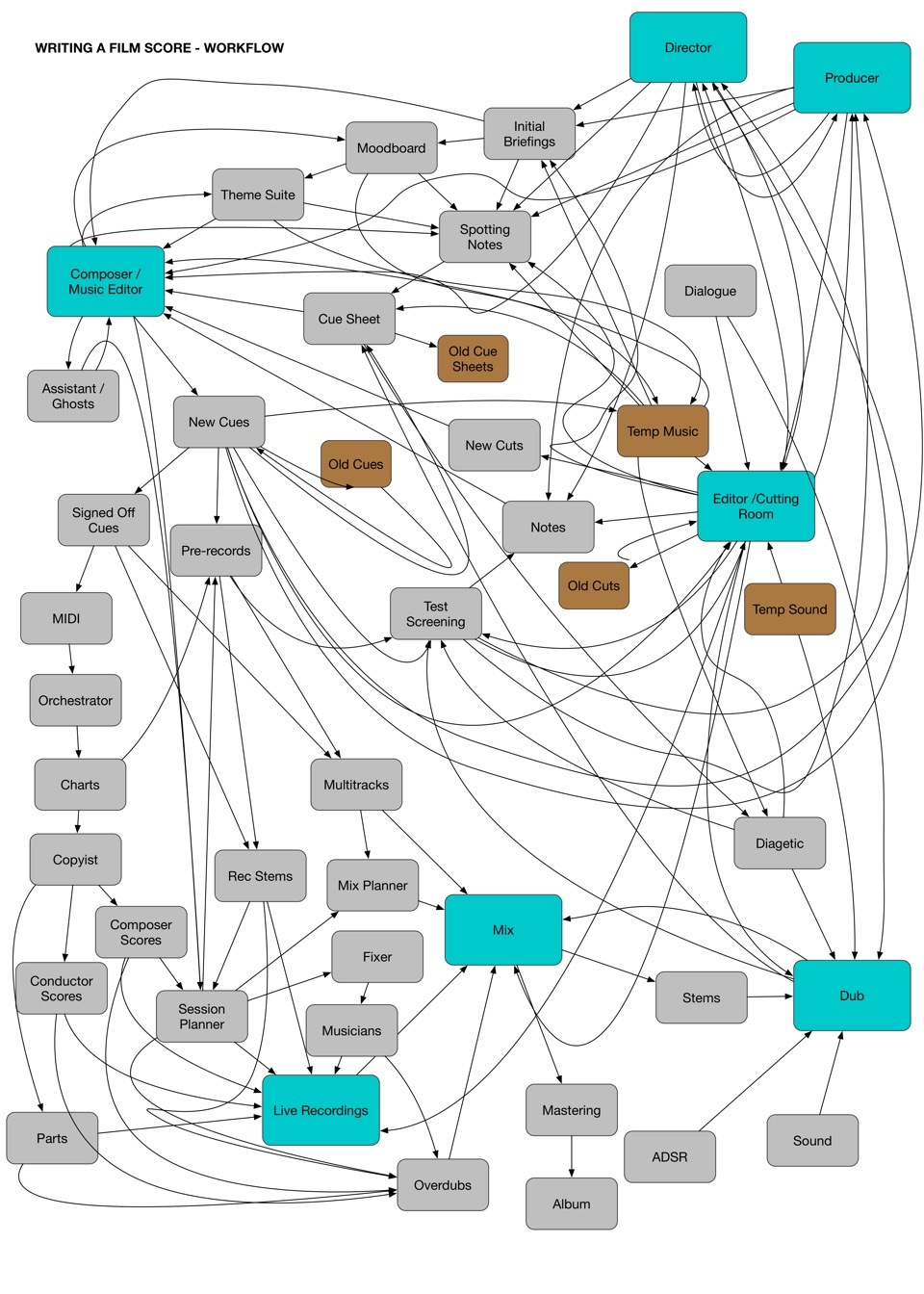 The first thing most directors and producers will say to you is “excuse me I find it really difficult to talk about music”. You should retort “well they say talking about music is like dancing about architecture”. Establishing a lingua franca is crucial to a successful collaboration. There is an inbred distrust in what we do (“you have to keep those guys close, they change shit up” - Terry Gilliam) so it is the primary job of a head of department (HOD) whether that be a music editor, supervisor, or composer, to make sure the director feels that you are merely an extension of her or his vision. You are a conduit for creating music from their description, and briefing, and for the producer, responsible for delivering on time and to the correct technical specifications and high quality bar expected of a professional music department.

It is very difficult to listen when you are speaking, so it is recommended you try and curtail this activity at a creative briefing in favour of listening. Get the information you need from your director and producer so that your initial submissions are not massively wide of the mark. If you speak avoid trying to second guess the director or producer, you should try and restrict your input to asking questions, and if they don’t understand them, help them understand by providing contextual examples.

If you do offer up some thoughts here are phrases you should AVOID like the plague (unless they’ve been explicitly mentioned):

Your director may love some of these suggestions but the producer will get the fear and think you and the director are going to become bezzie pals and go off the rails and create a critically acclaimed flop.

Not everyone does this, but it’s an excellent way of trying to establish a lingua franca, and a good opportunity to hit massively wide of the mark without having actually written anything and the crushing sense of disappointment and fear this can create for all parties with your first creative exposition.

A moodboard should be a bunch of good film cuts, both from other composers and possibly some older work of yours that you offer up as an initial discussion point and as possible temp fodder for the cutting room (this is an excellent way of getting the editor and his assistant onboard, offering up help from the outset - she or he won’t use any of the material you provide, but it’s the thought that counts).

Remember though, do unto others as you would have done to you. So don’t offer up mood boards that will paint you into a corner. Namely: 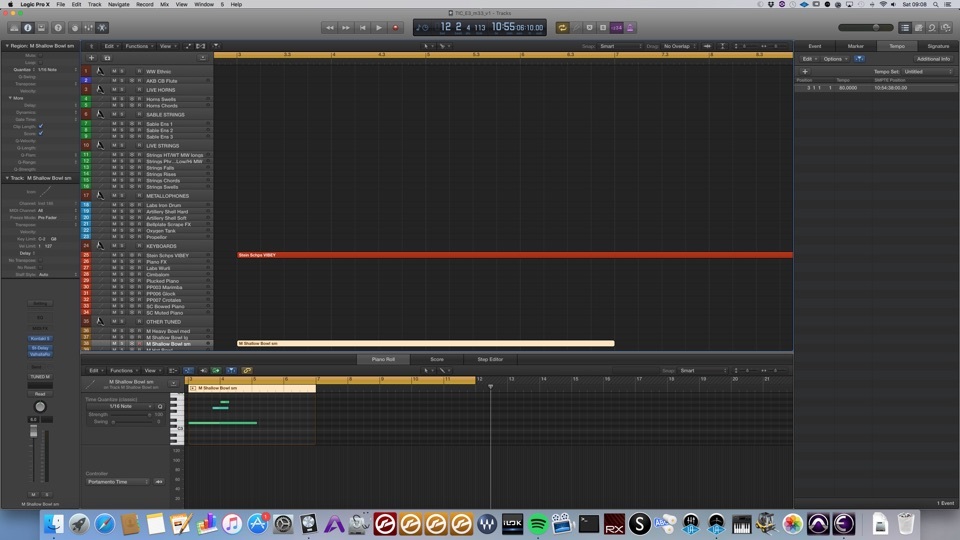 It is a commonly agreed principle that our job shifts from being conceptualists and composers very quickly to sausage making factories… And this doesn’t just stop at us churning out cues, revising from notes and re-conforming to new cuts, it runs through recording and mixing. To give your team a fighting chance of being able to deliver your masterpiece on time, it is advised that you create a template so that you’re not delivering 50 odd totally differently organised multitracks for 50 odd cues. But that your pizzicato track always lives on track x and is the same pizzicato sound. This means your mix engineer will only need to treat it the once, even if it appears on 50 cues.

Many composers have a massive master template so they can move from one job quickly and between jobs when they’re stacked up. Often these won’t change from year to year and can often be the result of weeks of work bussing and stemming and doing all sorts of complicated things.

Recent jobs we’ve done here would suggest that it is worth taking a day out before starting any project to design a bespoke template for each gig. Limiting the size of your template so it doesn’t play host to any possible job you may be asked to do will help curate a sound specific for the needs of your new project. Sure there will be your favourite string writing patch you always use, but by trying new libraries and sounds you may feed valuable inspiration. By limiting your resources you will become more resourceful compositionally, and less likely for your next score to sound like your last.

Here’s some tips from us:

Again not everyone does this, and indeed it may just be an internal exercise for the composer. But where possession is 9 tenths of the law, execution is 9 tenths of composition. 1 tenth is actual composition. By setting time aside to create a suite of themes, collections of instruments, sounds, lights, darks, highs and lows, you offer yourself the opportunity to make your first massive mistakes before you start cutting cues to the film and filing official submissions.

BUT, do this well and you’ll also start to create a common language with the director even if that is “I love the squigglybobs, how about we put some of those here”. It is strongly recommended that you apply this suite to some cut up picture of the best bits… or indeed the suite is a collection of broadly composed cues where you’re not really looking at the cut or listening to the dialogue. Directors listening to music blind may find this incredibly abstract, but if you’re too married to the picture they will stress out. At this point of involvement the cut is usually in the hands of the editor, and the director may hate it. So make sure you’re playing fast and loose with the images. 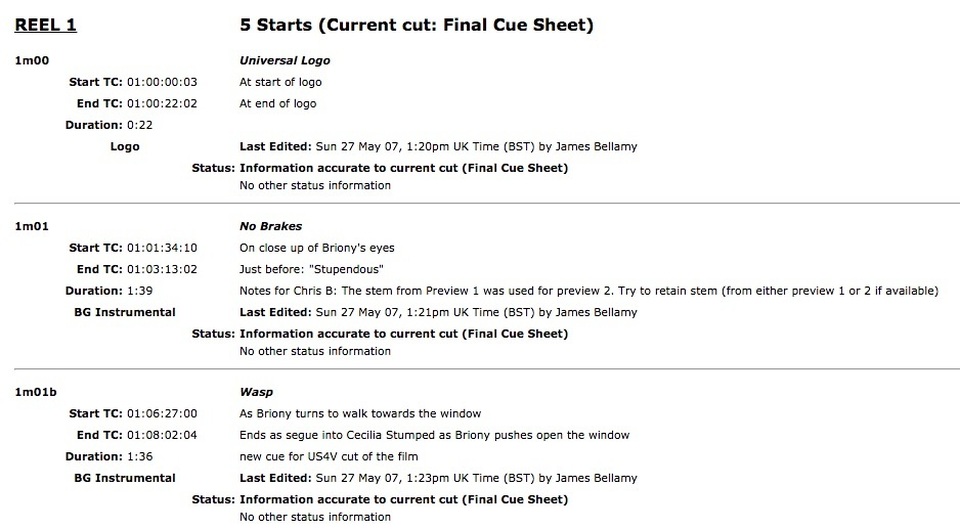 Your last leisurely day sitting waxing lyrical about all the things you’re going to do and how wonderful the score is going to be before the starting pistol is held aloft!

Like your initial briefing this is your opportunity to LISTEN. This is the longest the director is going to talk to you about his / her film and the score. Get someone to take notes for you so you don’t disengage or worse still edit out important facts so you stay on top of the comments. If you have a music editor they should be happy to do this. If not, an assistant. Failing that, anyone!

Different directors approach this differently. Some like to watch (and admire) their work then roll back and discuss a scene or part. Some are happy to talk over the top, or indeed stop the film dead to drill down into details.

The purpose of the spotting session is to takes notes so you can create a cue sheet. The word “cue” refers to a musical “start.” They can operate as part of the scene, or straddle several. So you need to number the cue, get the in and out points for each cue. For this you will need the editor to throw up some BITC (burnt in timecode) that will give you the rough hours:minutes:seconds:frames, create a very brief description of the cue (which is likely to become its title), describe the “in” action and the “out” action and then take notes on what the director wants the music to do. Spotting sessions move fast, (and accelerate as the end of the day approaches), so it is likely that you’re not going to be able to nail all of this info at the time. Therefore, make sure you’ve got as good a description as possible, and once the spotting session is finished go through your notes immediately to hone down a more working document for yourself. If everyone is willing it’s also useful to tape the whole meeting. Be warned though, some directors don’t like the idea that they may be “on the record.”

Sometimes directors will hold back, feeling that they’re piling too much music into their film, so don’t be afraid to go “are you sure you wouldn’t like something here”. The spotting session is also a good time for you, your music supervisor and your music editor to spot any diagetic needs. These are bits of music which have a source on screen. So if you’re in a hairdressers and there is no music, this would be a good opportunity to point out there would probably be something playing in the background, and agree on which department is going to deal with that, if it’s going to be you plying some blue rinse funk or a library track, or something the supervisor is going to ‘synch’. There is nothing worse than being at a thousand pound an hour dubbing stage as a head of the music department with a gaping hole in the soundtrack!

One of the riskiest aspects of a collaboration as huge as a film score is everyone working off different documents that say different things. So we recommend some form of online solution from the excellent spottingnotes.com to creating a Google Sheet to share with your team. The cue sheet will become your bible so you should try to cram as much info onto it so people don’t go off and start pinning post it notes to computer monitors. If your editor loves to write notes in a shiny moleskin make sure he or her has transcribed it into the document so its inner secrets aren’t deposited into a bag bound for their home just before you embark on an all nighter. Here’s the info you need to establish:

The convention for this in film is [reel]m[ID] so your first cue in reel one will be 1m01 your second 1m02. On reel two you may have 2m13 etc etc. Some editors and composers reset so the first cue in reel two is 2m01, but this can be massively confusing if the cue changes which reel it is in. You suddenly have the filing difficulty of 2m01 (formerly 1m13).

A very brief description of the ‘event’ the cue is scoring. “Head Pops Out Of Porthole” or “Dave Laughs” keep it short because it’s likely this will be in your file title when you create the cue.

A brief description of what’s happening on screen at the in timecode point. eg. “when eye is clearly visible as the head comes out of the porthole”.

"Out" Time code and action

Repeat what you did for the “in” point.

With the starter pistol held firmly aloft, we’ll rejoin next time with our advice on starting your score, all the way through sign-off to getting prepared for pre-records, your final orchestral sessions, mix and the dreaded dub… With rejected cues, re-cuts, re-thinks, die-hard temp and poor screening scores all thrown in for good measure!

In part 3 we’ll try and get you across the finish tape with our advice on gently encouraging your collaborators to sign off on cues so you can get prepared for the most challenging, the most nerve wracking, but also the greatest part of being a film composer… PRODUCTION! But we’ll also start the next chapter with the more sobering section header “getting fired”, it’s OK, you pass Jail, and get to start back at Go without collecting 200 bucks, but it is rarely the end of the world, or indeed your career.