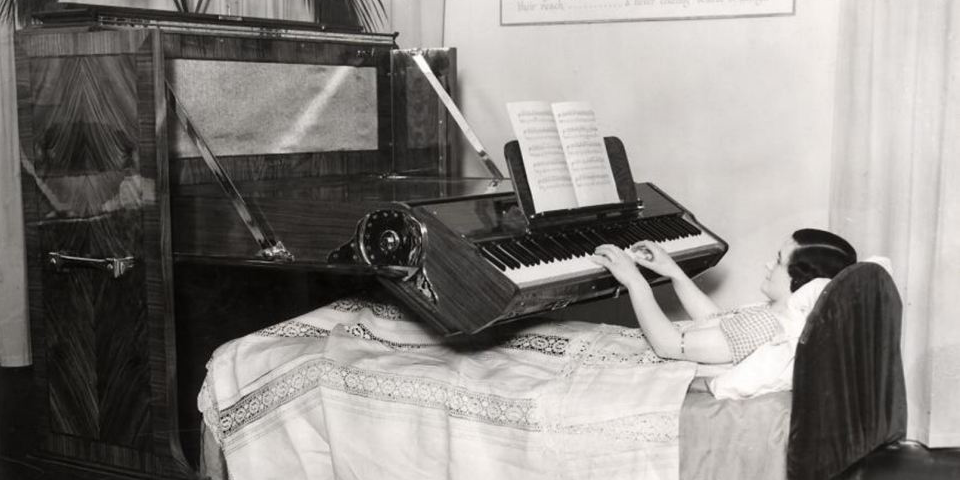 If you’re looking for the universal sign of impending disaster in a cartoon, or the definition of a comically tough removal job, the piano has to be your instrument of choice. By trying to manhandle one up a large flights of stairs in The Music Box in 1932, Laurel and Hardy won the first Academy Award for Live Action Short Film (Comedy), and the instrument’s ability to flatten people on sidewalks, or trap their fingers under a lid – as if those 88 keys were badly tempered teeth – has given it a good run in the slapstick business.

Even an upright piano can end up being 300-400kg, which takes it out of the featherweight, “wandering minstrel” class by some margin – though does make it strong enough to hold up a dancing Jerry Lee Lewis, who confirmed that if he was destined to go to hell, he was “going to go there playing the piano”.

It’s a testament to the fundamental allure of the instrument that despite its imposing physics, people have gone to great lengths to make sure a piano accompanies their lives. On turning 100 years old on Monday March 20, 2017, Vera Lynn reflected on how, when she went to sing to the troops as far afield as Burma, they would carry a little upright piano around in a truck for her to sing to. More remote still, Captain Scott took one to the Antarctic on his Discovery expedition at the turn of the 20th century –not just on the boat, but also to his first hut, at McMurdo Sound. In his diary, the captain makes grateful references to Royds, the only musician in his crew, who played for them before evening meals. They even had a little concert in the hut during a cold snap, which when you are at a latitude of 77.5 degrees south, means a temperature of minus 40. “I can well believe,” says Scott, “that our music smooths over many a ruffle and brings us to dinner each night in that excellent humour, when all seem good-tempered … and ready for fresh argument.” 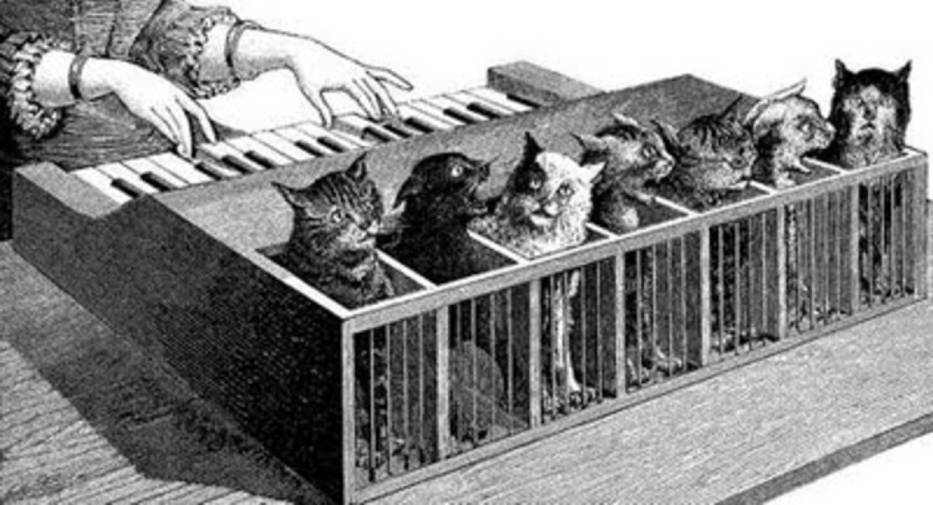 A few other compass points on the piano map: the “bed piano”, a 1935 design to make playing possible for those confined to life on the horizontal; the Katzenklavier of 1650, in which the keys each banged a small pin against the tail of caged cats, selected for their pitches of meow; Liberace’s Baldwin grand, covered in mirror glass and rhinestones; John Cage’s “prepared” pianos, where tacks, rubbers and other paraphernalia interfere with the strings (check out the opening of the Jerry Goldsmith score for Planet of the Apes); Brian Wilson’s tiny toy piano; Daniel Czapiewski’s two-ton, six-metre behemoth; the maniacal player-pianos of Conlon Nancarrow … The piano has shape-shifted its way through the musical world of the past 300 years.

I spoke to pianist and composer Rolf Hind –renowned for his performances of contemporary and 20th century pieces, with their sometimes extended technical demands (one Telegraph reviewer wondered: “Just how many hands does Rolf Hind have?”). Asked about what makes the instrument so welcome in all walks of music, the first thing that comes to Rolf’s mind is being asked a different, stranger question.

“I think perhaps the person hadn’t had much experience of the piano, but they asked me ‘What’s the most difficult note to play?’, which kind of makes sense on other instruments, but not the piano.” The higher reaches of the violin or the trombone demand an awkward turning out of the elbow or a tightening of the muscles around the lips – which can make some registers, or some notes, more difficult than others. The piano doesn’t present such difficulties. Thelonious Monk reckoned “the piano ain’t got no wrong notes,” but then he knew how to improvise his way out of the tightest musical jam – and comedian Les Dawson made playing “wrong” notes very funny. But the point is, on instruments like violins you can fall between the cracks in a way you can’t on the piano, whose tuning is not the job of the player. In fact, while anyone can get a note out of a piano, the learning curve of the violin begins somewhere around the sound of a fire in a petshop.

“The piano allows anybody to be an orchestra, an ensemble, a trio, an octet or a soloist.”

If you look at a newborn baby, gradually discovering some control of their wayward limbs, they sometimes show a burst of excitement by flapping their arms up and down like Elton John hammering out chords. Being a percussive instrument, and showing you in black and white where all the notes are, the piano seems perfectly engineered to carry our early musical experiments.

“I think the fact that more than one person can play it is really important too,” says Rolf. “It is quite social in that way, and I think it is easy to underestimate that.” (For anything but an underestimation of duet playing, consult the YouTube below and watch Chico and Harpo Marx playing together in The Big Store.) “I don’t think there’s another instrument with that kind of duet literature. The other clue is perhaps in the name piano-forte – the fact that it can, as an acoustic instrument, be loud enough to accompany a choir yet quiet enough to accompany a song. Guitars can’t – I mean, without electrification, they are quite puny really.”

Dave Brubeck, the man who made all hip daddy-o groovers swing in 5/4 for a while in 1959 with Take Five, said the piano was “like the whole orchestra to me” – an idea that is not lost on composer and silent movie pianist Neil Brand:

“The piano allows anybody to be an orchestra, an ensemble, a trio, an octet or a soloist. An instrument that allows ten fingers to express ideas has to be in advance of any other, in application at least, and yet its aesthetic - the sense of scale, the black and white keys, the very ownership of such an item suggesting a degree of culture in the owners, all add up to a desirability beyond any other musical instrument. That a piano can hold an audience for 6 and a half hours of silent film (as I will be doing at the Barbican in April) where any other instrument, including keyboards, would falter in the variety of its sound palette, is astonishing but true. Nowadays we buy pianos for our children to learn on - a hundred years ago we would have bought one as the social centre of our house, no matter how poor the dwelling. And somebody we knew would have been able to play it, and delight us and our neighbours with it. I would love to get back to that...”

It’s hard to imagine Stravinsky’s Rite of Spring being ported over to any other instrument in the way it was reworked by the composer for piano duet – something he apparently played with Debussy at a party. I would love to think that everyone danced until they fell over, with respect to the subject of the ballet. The way so much music – great scores and famous songs – can be compacted and put on to the piano must have enlivened those long and inconceivable Victorian nights before ITV’s Parking Wars gripped the nation. Am sad to report, however, that it seems the story that Victorians covered up the legs of pianos for prudish modesty’s sake may be a myth, and could, it turns out, have more to do with the domestic realities of dusting.

Why does the piano work in so many musical situations? And why does one of the most mechanised instruments sound so human? In Scott McCloud’s book Understanding Comics, he makes a point about faces: the simpler the face on the page, the more people can imagine it being them. Two dots and a smile can be anyone; a detailed likeness is a specific person. Some instruments feel like specific faces: perfect for certain situations, but not all. Maybe we’ve allowed the piano to become multifaceted because, being capable of playing at least 10 notes at once, loud and soft, it has made itself indispensable, a face that looks at home in any crowd.

It is there in restaurants, train stations, hotels, dance classes, jazz, classical, ragtime, folk, fusion, village halls, house music, rock, tangos, churches. It will be there in the future, however dystopian, if you believe Deckard’s apartment in Blade Runner. It has inspired one of the worst ties you can put around your neck. Go to a recital of Chopin in the concert hall and the piano may follow you to the pub afterwards for a singalong, happily shouldering a round of drinks on its lid. As Tom Waits once excused himself: “The piano has been drinking, not me.”

Many thanks to Neil Brand & Rolf Hind for their words, be sure to check out their sites below.